‘A Treatise on the Sabbath’ – quotes from John Owen

Quotes from A Treatise on the Sabbath: In Which Its Origin, Causes, Nature, and Obligation Are Considered Objections Reputed, and Practical Rules for Its Observance Added written by John Owen (London: 1829).

Known as the ‘theologian’s theologian’, John Owen (1616–1683), was vice chancellor of Oxford University and served as advisor and chaplain to Oliver Cromwell. Among the most learned and active of the Puritans in seventeenth-century Europe, he was an erudite and accomplished theologian both in doctrine and practical theology. 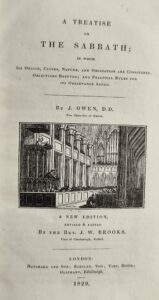